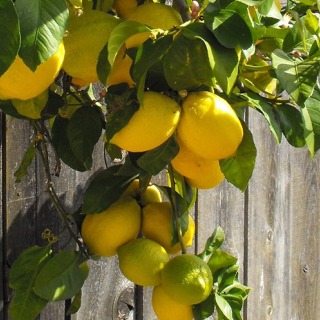 The fruit of the Eureka variety differs in general from that of Lisbon, the principal other variety in California, in that it is more prominently ridged and has a somewhat rougher rind surface and usually a smaller and less pronounced nipple.

The Eureka variety originated in Los Angeles, California, in a group of seedlings grown from fruit of Italian origin the seed of which is said to have been planted in 1858.

Both have remained the principal varieties in California and have achieved the status of major lemon varieties of the world.

Russo (1955), as a result of a study of varieties in California, recently expressed the opinion that Eureka has its ancestry in the Lunario variety of Italy.

Within the limits of normal variation associated with environmental and disease factors, bud progenies from the parent trees of these selections are virtually indistinguishable with the exception of Ross, which is more vigorous than typical Eureka and differs in other respects.

Presumably because of their greater vigor, caused in part at least by freedom from virus infection, the use of known or presumed nucellar clonal budlines during recent years has increased to the extent that virtually all Eureka lemon trees propagated in California are now seedling or nucellar clonal selections.